This summer, the president granted E15 ethanol blends a temporary waiver from summer sales restrictions, estimating it would save working families up to 10 cents per gallon. As it turns out, drivers saved about 16 cents per gallon, on average. In Midwest states like Ohio, the savings were even greater, climbing to an average of 21 cents per gallon, based on OPIS data reviewed by ABF Economics.

That’s one reason rural leaders like Governor Mike DeWine are leading the charge to secure permanent, year-round access to cleaner, lower-cost E15 blends in their home states. Along with other Midwest governors, DeWine formally petitioned the EPA to establish parity between E10 and E15 fuels in Ohio through Section 211(h)(5) of the Clean Air Act.

In his letter, Governor DeWine pointed out that “relying on annual emergency waivers for year-round sales of E15 is not a permanent solution for Ohio’s fuel retailers, consumers, or the environment.” We could not agree more. Not only is ethanol a major driver for Ohio’s bioeconomy, it’s a proven shield against volatile global oil prices. And higher ethanol blends like E15 can put those savings within reach more of hardworking families across the Buckeye State.

Unfortunately, the facts haven’t stopped refiners from lobbying against E15, falsely claiming that a permanent fix for E15 in Ohio could disrupt fuel production – never mind real-world market experience or the reports from major consulting firms like MathPro, Inc. and ICF showing that the waiver would have no such impact.

Not only does E15 save money at the pump, research shows that statewide sales would add nearly $650 million to Ohio’s economy and $231 million to Ohio incomes, boosting farmers and rural workers alike. Even better, shifting to E15 across the state would reduce greenhouse emissions by 746,000 metric tons – equivalent to taking more than 163,000 vehicles off Ohio roads each year.

Thanks to Governor DeWine, Ohio drivers may soon have uninterrupted access to those benefits year-round. This September, EPA Administrator Michael Regan told members of Growth Energy that his agency would “finalize this action in time for the 2023 summer driving season.” Ohio is also setting a powerful example for other states and lending new momentum to efforts in Congress to enact a nationwide fix.

Let’s hope more leaders follow Governor DeWine’s lead before the next crisis sends prices rocketing back to $5 per gallon. 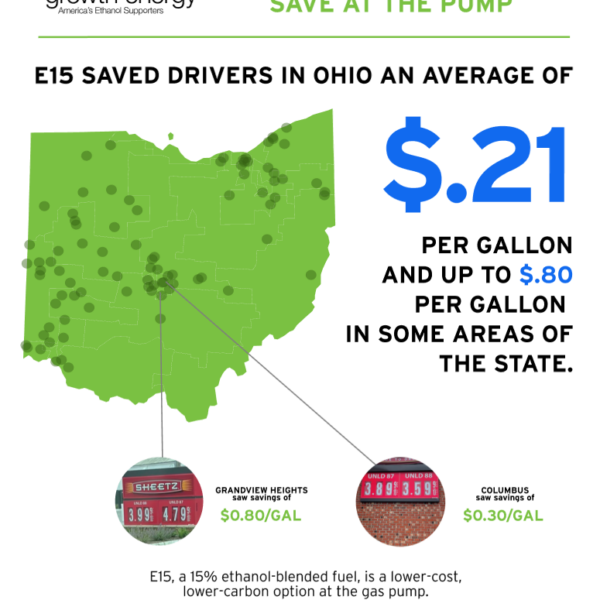