Unfortunately, years of misinformation from the fossil fuel industry have helped to generate several common myths about the benefits of biofuels. This anti-renewable energy campaign is designed to pit voters against clean energy and hide the real climate benefits of biofuels. We’re offering the real truth behind some of our opposition’s least credible myths about biofuels. To make an informed decision, it’s important to understand the facts.

Since 2005, when renewable fuel standards were adopted, agriculture land use for crops actually fell by over 5.7 million acres, according to the U.S. EPA’s Greenhouse Gas Inventory. During that same period, corn production jumped nearly 28 percent. In fact, innovative farming techniques allow today’s farmers to grow about five times as much corn as they did in the 1930s on 20 percent less land. 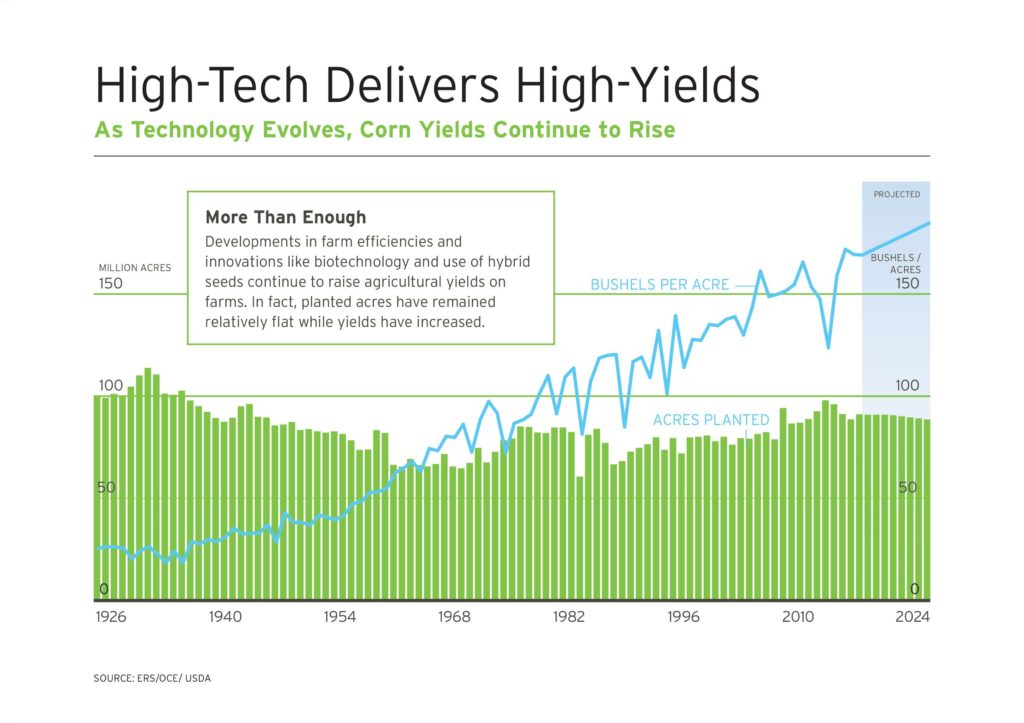 2. Innovations in Agriculture Have Led to Lower Use of Fertilizer

Some claim that nutrients from farming can accumulate in our waterways, but ongoing innovations in agriculture allow U.S. farmers to grow the same bushel of grain with less fertilizer year-after-year. In fact, the nutrients used to grow an average bushel of corn fell 27 percent from 2000 to 2014.

There also is no evidence linking the production of biofuels to the size of the hypoxic zone (aka, the Dead Zone) in the Gulf of Mexico. In fact, the measurements from Louisiana State University show that the zone has actually shrunk since 2007, when renewable fuel standards were last expanded.

Ethanol is biodegradable and has never contributed to the kind of catastrophic oil spills that have devastated the Gulf of Mexico, the Santa Barbara Channel or the Prince William Sound in Alaska

Most of the cost of food is driven by oil prices, according to the World Bank, because the main cost of food comes from transportation, processing, refrigeration and packaging costs, which are all driven by oil.

More importantly, the corn used for ethanol production is feed corn – not the kind of corn that we eat.

A few years ago the “food versus fuel” debate raged in Washington. … It is time to revisit that debate. Biofuels refineries have been churning out record volumes of more than 1M barrels a day of corn ethanol. … Yet last week, corn dropped to $3.01 a bushel, a level last consistently seen before lawmakers enacted the mandate in 2007.
– The Financial Times, September 6, 2016

In fact, ethanol production results in more feed for livestock, so we’re producing food and fuel. A third of every bushel of grain used for ethanol is left over as coproducts heavy in protein and fat, and those coproducts are America’s second largest source of animal feed. Despite record biofuel production, Bloomberg reports that consumers in 2016 are “winning out” because “food prices have fallen for nine straight months in the U.S.”

And the most exciting developments are just around the corner. The next generation of ethanol uses feedstocks made from agricultural waste, wood and other biomass.

The ethanol industry does not receive subsidies. In fact, ethanol saves taxpayer money and it saves consumers money. And unlike in the oil industry, tax incentives for corn ethanol disappeared years ago.

Ethanol is more energy efficient to produce than gasoline. For every 1 BTU of energy used to make ethanol, ethanol provides a 2.6 BTU return.

Research by the EH&E shows that greenhouse gas emissions from corn ethanol are 46% lower than gasoline, and studies at the Department of Energy’s Argonne National Laboratory demonstrate that advanced varieties can reduce emissions by 100 percent or more. These figures do account for alleged indirect changes in land use and the other energy inputs required to grow and process feedstocks.

Choice at the Pump

WASHINGTON, D.C. – Today, environmental scientists and experts from across the country associated with the U.S. Department of Energy’s (DOE’s) Argonne National Laboratory released a new set of comments in response to the recent article in the Proceedings of the National Academy of Sciences (PNAS) by Tyler Lark, et al. The scientists, including Steffen Mueller […]

Hitting the road for the long weekend? Choose higher blends of biofuels to save money at the pump! E15 has saved consumers up to $.60 per gallon over the last several months. That's a meaningful difference. https://t.co/xaIvK4eY9q

🔘 Outdated and inaccurate projections for future crop prices. 🔘 Double counted and incorrect emissions results. 🔘 Magnificent changes in land use that are overestimated. The anti-biofuel study from Lark is found to be problematic and misleading → bit.ly/3lJcxs3