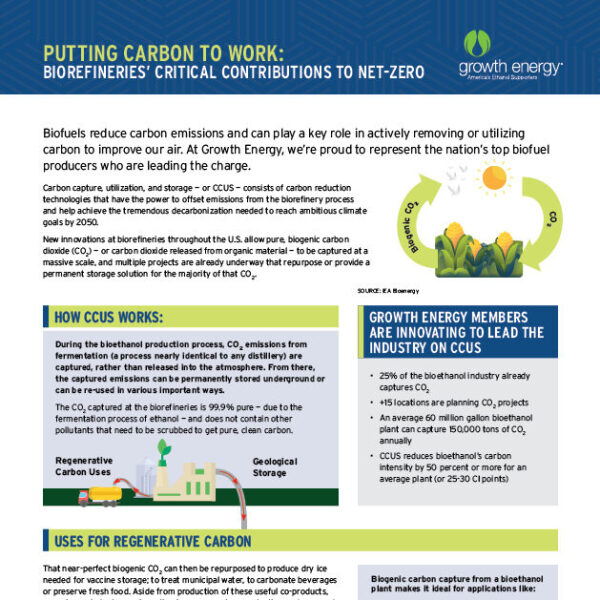 There’s no denying that biorefineries play a significant role in driving down carbon emissions. Not only is bioethanol a homegrown, earth-friendly fuel, but carbon dioxide captured from fermentation has critically important commercial, agriculture, and municipal uses as well.

Our biogenic CO2 is 99.9 percent pure and, once captured at biorefineries, is key to many supply chains, whether it’s used to produce the dry ice needed to store the COVID-19 vaccines, to treat municipal water, carbonate beverages, or help preserve fresh food. It can also be permanently sequestered underground, a technique that scientists agree is critical to achieving global and U.S. climate goals.

At Growth Energy, we’re working with policymakers to further incentivize carbon capture and support the work of biofuel producers who are leading the charge.

What is carbon capture?

Carbon capture, utilization, and storage (CCUS) are carbon reduction technologies that have the power to reduce carbon emissions from the biorefinery process and help us meet our climate goals. Carbon dioxide emissions are captured from fermentation before being released into the atmosphere and re-used in various ways.

What are the benefits of carbon capture?

In order to reach net-zero emissions by 2050, CCUS will have an important role to play, especially when it comes to producing renewable, low-carbon biofuels and ultimately net-negative biofuels. CCUS as part of a broader strategy helps ensure we can continue to drive down emissions and reduce the carbon footprint of already low-carbon, renewable biofuels, and maximizes their climate benefit. Ultimately, this will support clean energy jobs and help achieve the deep decarbonization we need in the transportation sector. In addition, CCUS — utilization — can be an important revenue stream for biofuels producers all while capturing and sequestering carbon emissions.

Biorefineries have long been pioneers in carbon capture technology, providing pure streams of CO2 for use by a range of industries and for multiple purposes, including for food, beverages, and dry ice. The captured carbon can also be sequestered underground where it will remain safely underground for millions of years.

Already, roughly 25 percent of the ethanol industry captures carbon dioxide. On average, each plant captures 99,000 to 153,000 tons of CO2 a year, and there is strong potential to expand on these carbon emission savings. Carbon capture and sequestration reduces ethanol’s carbon intensity by 25-30 points, which is a significant improvement in our industry’s quest to net-zero emissions.

If our goal is to reduce carbon emissions, then we have to use every tool in our toolbox, and that means building on our industry’s leadership through policies that support carbon capture.

How is Growth Energy supporting CCUS?

For example, in 2021, Senators Tina Smith and Shelley Moore Capito introduced bipartisan legislation to enhance the 45Q tax credit that incentivizes investment in carbon capture projects. Another key proposal is the bipartisan Coordinated Action to Capture Harmful (CATCH) Emissions Act, which incentivizes industrial facilities to capture and store carbon in an effort to reduce our nation’s carbon footprint and support local economies. In addition, we supported the bipartisan passage of the Storing CO2 and Lowering Emissions Act (SCALE Act) to build out CO2 transport and storage infrastructure for industrial sources, which was signed into law last fall.  Growth Energy is working with the Department of Energy to identify how to maximize the CO2 infrastructure investments as a result of this bill’s passage.

Together, policies like these will help to ensure that biofuel producers continue to turbo-charge our climate progress, while supporting job growth in rural communities and offering consumers a cleaner, more affordable choice at the pump.