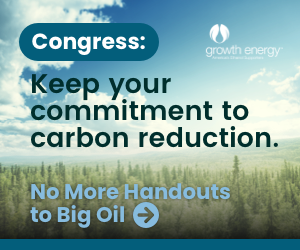 WASHINGTON, D.C. – Today, Growth Energy launched a new digital ad campaign urging President Biden and leaders in Congress to stop oil industry handouts and uphold their commitments to reduce carbon emissions and support low-carbon biofuels. The ads, appearing online in the Washington Post and POLITICO, will run until August and will direct readers to an action page focused on restoring year-round sales of E15 and emphasizing the importance of strong Renewable Volume Obligations (RVOs) under the Renewable Fuel Standard (RFS).

In the wake of recent court decisions that could limit the market for U.S. biofuels, Growth Energy CEO Emily Skor emphasized the urgent need for action by regulators and lawmakers:

“It’s time for leaders in Washington to make good on their commitments to clean, renewable energy and put a stop to Big Oil’s efforts to restore its monopoly over the U.S. fuel mix. The evidence is clear. Congress and the administration cannot decarbonize transportation without a growing role for low-carbon biofuels, which are vital to our climate, working families, and the economy.

“The last thing we can afford are more handouts to the oil industry. Policymakers must act swiftly to ensure uninterrupted, year-round access to E15 and set ambitious biofuel blending levels, including a statutory minimum of 15 billion gallons of conventional biofuel, under annual targets.”

E15 is a 15 percent ethanol blended fuel, known to many consumers as Unleaded/Regular 88 (UNL88), that allows drivers to save money at the pump while reducing greenhouse gas emissions. In fact, if the U.S. transitioned from standard E10 blends to E15, greenhouse gas emissions would decrease by 17.62 million tons per year, which is the equivalent of removing approximately 3.85 million vehicles from the road. Nationwide E15 would also add $17.8 billion to the GDP, create 182,600 new jobs, generate $10.5 billion in new household income, and save consumers $12.2 billion in fuel costs.

This blend is currently approved for use in cars model year 2001 and newer and is available at over 2,460 retail sites in 30 states. To date, Americans have logged over 22 billion miles with E15.

In June 2019, the EPA issued an interpretation of a provision of the Clean Air Act that grants a 1.0 psi summertime waiver of Reid vapor pressure (RVP) requirements. In doing so, EPA allowed drivers to access cleaner, more affordable E15 year-round.

On July 2, 2021, the D.C. Circuit Court of Appeals overruled this interpretation, arguing that the word “contains 10 percent” in the relevant RVP statutory text does not extend the 1.0 psi RVP waiver from E10 to E15, thus limiting sales of E15 in conventional fuel areas during the summer, affecting 85 percent of current E15 fuel retailers across the country.

Each year, the Environmental Protection Agency (EPA) issues a rulemaking proposal governing how much renewable energy should be available to consumers in the year ahead. These RVOs determine how many gallons of biofuel refiners will add to the motor fuel mix. After a proposal is issued, the agency then accepts comments from the public before issuing a final rulemaking under the RFS.

However, the RVOs for 2021 and 2022 have yet to be proposed, generating added uncertainty for biofuel producers and farmers.

WASHINGTON, D.C. – America’s top biofuel and farm advocates called on the White House to take immediate action to address reports that the Environmental Protection Agency (EPA) may soon seek to destroy demand for billions of gallons of low-carbon biofuels under the Renewable Fuel Standard (RFS). The following joint statement was issued by the Advanced Biofuels Business […]

We are pleased to present the 2021 Fueling Growth Award to @SenStabenow for his efforts to support the biofuels industry! #FuelingGrowth https://t.co/OMNXjgNLky

We are pleased to present the 2021 Fueling Growth Award to @SenHawleyPress for his efforts to support the biofuels industry! #FuelingGrowth https://t.co/G4walo6FXB

We are pleased to present the 2021 Fueling Growth Award to @SenSherrodBrown for his efforts to support the biofuels industry! #FuelingGrowth https://t.co/hvM6PvUonj

Thank you so much for this great honor. I look forward to continuing to work together to promote U.S. biofuels and support this critical industry. https://t.co/98yfV1atz7