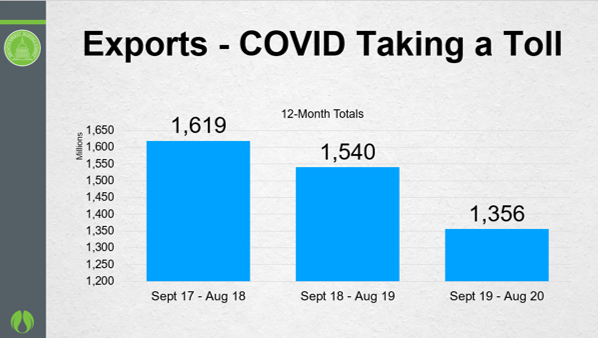 This week, the government released U.S. trade data for August 2020 that showed ethanol exports of 101 million gallons (mg), which was a nice uptick from July exports of 74mg. This data brings the new twelve month rolling total through August to 1.36 billion gallons (bg), putting U.S. exports on pace to be 110mg lower than the 1.47bg total in 2019.

Strong industrial demand in several markets – including Mexico, India, and South Korea – is slightly offsetting reduced demand due to COVID and various trade barriers around the globe.  Mexico in particular had another strong month of 7mg, versus a more normal pace of 2-3mg per month, primarily due to hand sanitizer and industrial demand. Decreased blending economics are affecting several markets, which is highlighted in discretionary markets like the Arabian Gulf, which is off 77.1mg YTD. Brazil has the largest year over year decrease due to the TRQ and reduced COVID driving demand, down 200mg over the most recent twelve month period versus the 2018 record.

You can explore this export data, as well as the latest DDGS and import data at Growth Energy’s Ethanol Data Hub.

Earlier this week Growth Energy and CSP, the leading source for convenience store news, hosted an interactive virtual E15 workshop for retailers, where more than 2000 retail sites were represented. The workshop’s full agenda covered everything retailers would need to know to adopt E15. During the workshop, Growth Energy’s Vice President of Market Development Mike […]

Don't forget to register for next Wednesday. On Oct. 28 @EmilySkor and new @NationalCorn President John Linder will host a virtual town hall to discuss the opportunities on the horizon for corn and biofuel producers. Register here: fjwebinars.com/account/regist… https://t.co/gVnmtsiZ5s

It has been a real challenge for the Biofuels this year!!! Great to have the opportunity to visit with @EmilySkor and talk about the bright future of Biofuels!!! https://t.co/BLugDIcwSI