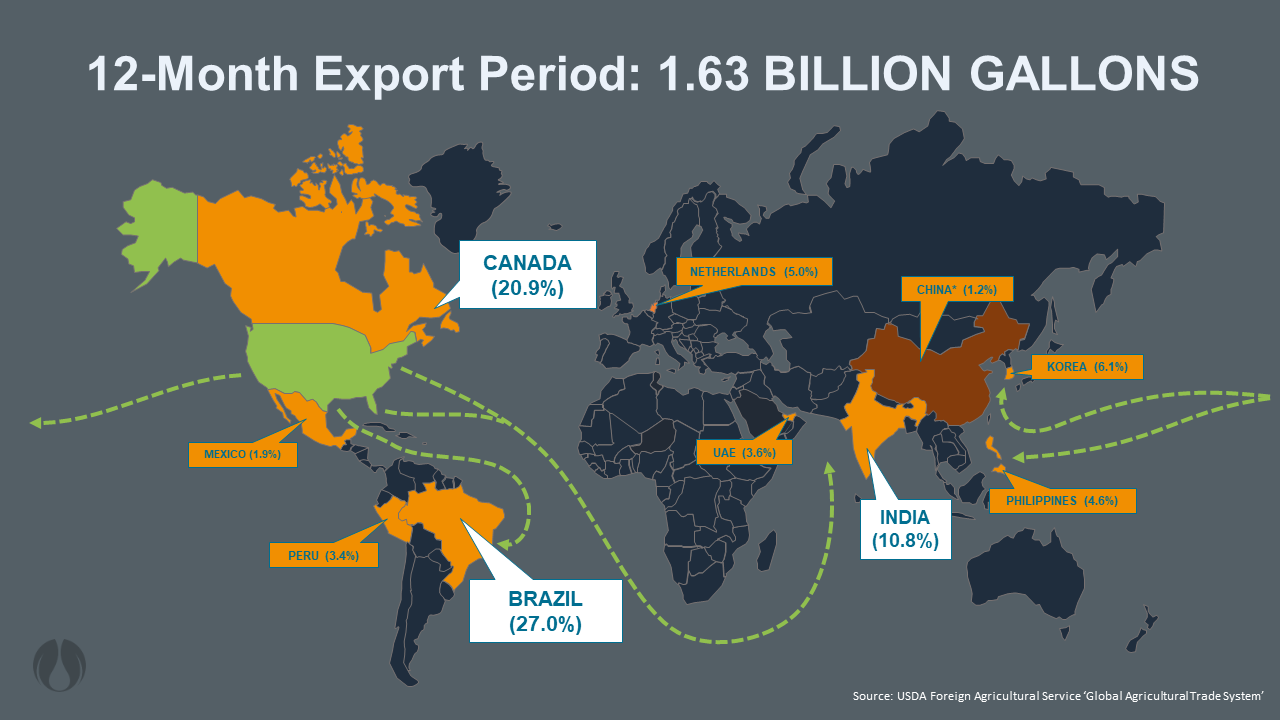 U.S. ethanol exports have proven remarkably resilient amid rising trade barriers over the last year, but the most recent Feb. 2019 exports numbers – 113 million gallons – show that buoyant global demand can only go so far towards counterbalancing lost markets. These numbers reinforce why biofuel producers and their agriculture suppliers are eagerly anticipating a resolution of trade discussions in China and elsewhere, allowing us to return to the growth trajectory promised by longer-term trends.

With the release of the Feb. 2019 ethanol export numbers, we are seeing the first major decline in 12-month rolling exports in the past year. The long-term impact of tariffs in major markets is finally being reflected in the relative decrease in exports when comparing Feb. 2018 to Feb. 2019 – with lost exports to China contributing quite a bit to the relative decline year-to-year. However, losses as a result of tariffs are not the only story told by slowing exports from Jan. 2019. Slight declines in staple markets have also impacted the overall export outlook for ethanol. While these losses were slight and will likely rebound, they reinforce the importance of smaller markets, which can help to offset volatility and tariffs in larger ones.

The Impact of Tariffs in the Chinese Market

The tariffs implemented in April 2018 on exports of ethanol to China have considerably diminished the ability for American producers to access the second largest fuel market in the world. This is reflected in the 12-month rolling exports, which dropped from 1.74 billion gallons in Jan. to 1.63 billion gallons in Feb. – a 47 percent decrease. There is a considerable demand for fuel ethanol in China following the Chinese government’s 2017 announcement to move the country’s fuel supply to a 10 percent blend of ethanol fuel by 2020, however it will be increasingly difficult for them to meet that goal without access to stable supply.

As China continues to ramp up the blending of ethanol into their fuel stream, the impact of tariffs will intensify for American producers and farmers who rely on stable export markets for their products. Additionally, as trade discussions continue, China will have increasingly less attractive options to reach a 10 percent blend rate in an affordable manner without access to U.S. ethanol. Establishing fair and open trade relations between the two countries is therefore crucial to ensuring that American producers and farmers and the Chinese government can achieve their goals.

In addition to long-term impacts from tariffs for 2018 to 2019, ethanol exports saw a slight decline from Jan. to Feb. 2019. Staple markets in Brazil, Canada, and India all saw minor decreases month-to-month, with Brazil falling far behind its pace for 2018. However, a number of smaller markets have improved exports on the year, a trend we also saw in the previous month’s exports.

In Brazil, the end of their harvest season marks a period of lower domestic production that means the country relies on American producers to meet their prodigious domestic demand for ethanol – the country averages a 47 percent blend rate annually. Despite a slow start to the year, with only 36 million gallons exported in Feb., heavy rains have impacted production in the country, according to recent reporting, and we can expect to see the demand for the more affordable American ethanol peak in April/May as a result. With rains affecting both hydrous and anhydrous ethanol production, hydrous ethanol prices reached a record high this week – as anhydrous ethanol exports from the country achieved a two-year high in March, further exacerbating supply issues.

In other key markets, exports to Canada dropped 15 percent month-to-month and are well below where they were in 201, with 14 million gallons exported for the month. Less surprising is the decline in exports to India, which has been experiencing a sugar surplus for some time. The country currently does not import ethanol for fuel use and high domestic production of sugarcane, behind an announcement last year that the country would reach a 30 percent blend rate by 2050, can explain volatility in the market.

Despite a disappointing month for exports due to minor declines in staple markets and ongoing trade discussions in China, smaller markets around the globe continue to prove an increasingly important aspect of the global outlook. It remains critical for our industry to engage with stakeholders and officials in those countries to ensure open and fair markets. Stay tuned for more on how the 2019 global ethanol outlook develops and what trends we can expect for the year.

We are excited to welcome UGI Corporation to Growth Energy as our newest associate member! growthenergy.org/2022/01/13/gro… https://t.co/S6l1i3hugG

Thank you @IAGovernor for your strong support for E15! We look forward to working with you to provide greater access to higher biofuel blends. https://t.co/AZgNAJVVSE