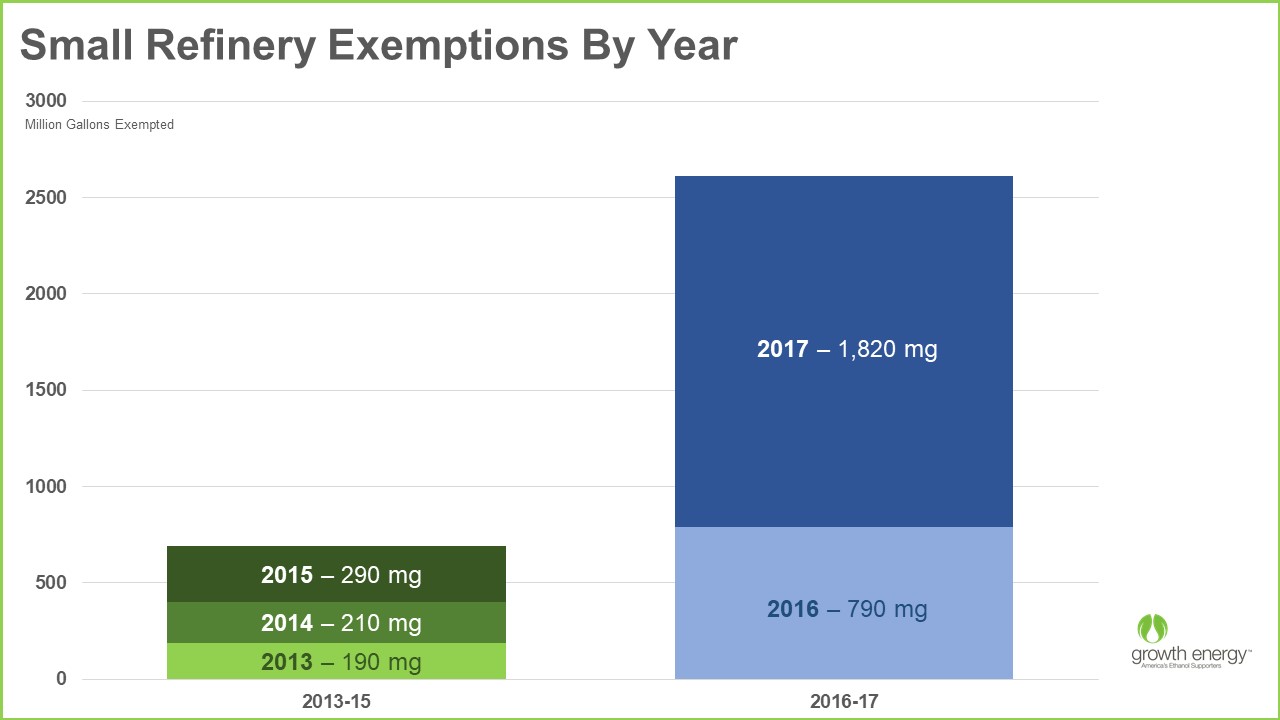 “EPA’s decision to grant five more small refinery exemptions is a slap in the face to rural communities, where farmers have lost a key market for their crops and biofuel plants have shut down or idled production,” said Skor. “EPA continues to hand out exemptions to unidentified refiners, which only strengthens our serious concern that EPA continues to enrich some of the most profitable oil refineries in the world, all in secret.

“Now more than ever, EPA must restore the 2.6 billion gallons of biofuel lost to these small refinery exemptions and ensure that the targets set by EPA are met in earnest, and we will continue to fight tooth and nail to see that happen.”

Under the RFS, refineries producing transportation fuel must demonstrate each year that they have blended certain volumes of renewable fuel into gasoline or diesel fuel or acquired credits from others called “RINs” representing all of part of those volume obligations. The RFS allows certain “small” refineries – those with a throughput of less than 75,000 barrels per day – to petition EPA for a temporary extension of an exemption from the renewable fuel volume requirements for a given year if they can show that compliance would impose a “disproportionate economic impact” on them. EPA is required to consult with the Department of Energy to determine whether to grant an exemption.

To date, EPA has yet to provide the public with any information regarding how it assesses small refinery exemption petitions and it has resisted release of almost all information regarding recent exemptions that have been granted, including: (1) the fact that it has granted an exemption; (2) the name of the exempted refinery; (3) the volume of renewable fuel exempted; (4) the years covered by the exemptions; (5) EPA’s analysis of whether the small refinery would be subject to disproportionate economic harm if it had to comply with the RFS.

In 2018, Growth Energy and allied organizations also filed a lawsuit in the D.C. Circuit Court of Appeals and a related administrative petition with EPA on the misuse of small refinery exemptions.

Additionally, Growth Energy and Renewable Fuels Association filed another lawsuit in federal district court in August on 2018, alleging that the Environmental Protection Agency (EPA) and Department of Energy (DOE) have improperly denied agency records requested by Growth Energy, RFA, and others under the Freedom of Information Act (FOIA). At the start of 2019, Growth Energy filed an appeal in federal district court in Feb. challenging EPA over their failure to address small refinery exemptions in their 2019 renewable volume obligation.

"The more biofuel in the mixture, the cleaner it burns." -- Dr. Daniel Schrag, Harvard University professor of public policy, geology, and environmental science and engineering. https://t.co/MLVXXn8N2i

Tune in 📺 Ethanol myth busting with Dr. Andy Randolph of @ECRengines → "In reality, ethanol is excellent for car - the high octane, the price, and the energy security, all things that are very important to us as a country right now." youtu.be/X69XSAg2J4w