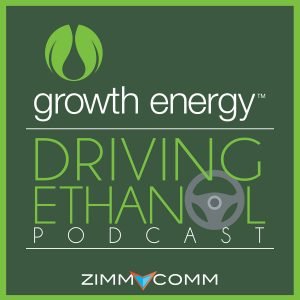 Growth Energy was created in November 2008 and so is celebrating ten years of advocating for ethanol this month. This edition of the Driving Ethanol podcast is the first in a series of three focusing on a decade of accomplishments for the organization.

For this podcast, we pulled some historical audio from the archives for comments from the early years with industry leaders, including Greg Krissek, who was with ethanol plant engineering firm ICM, Inc at the time, first Growth Energy co-chairs Ret. Gen. Wesley Clark and former Rep. Jim Nussle of Iowa, first CEO Tom Buis and current CEO Emily Skor, and President Barack Obama.

Driving Ethanol is a subscribable podcast that can be found in iTunes and other podcast directories.

A complete interview with Growth Energy CEO Emily Skor on the 10th anniversary is also available. Skor discusses how the organization has made strides in proving ethanol’s performance value, growing biofuels markets, and advocating for ethanol policy. Background information can be found at GrowthEnergy.org.

*Story was originally published by AgWired

Always a premier industry event! Our Past President & Board Member Andrea Kent “Zoomed in” to be a featured panelist alongside colleagues from @GrowthEnergy and @USGC talking global ethanol markets at Growth Energy's 2021 Executive Leadership Conference. 🇨🇦 🇺🇸 🇲🇽 #ELC2021 https://t.co/2qpYWtq8OX

Senior Vice President @JimPirolli was a featured panelist at Growth Energy's 2021 Executive Leadership Conference. The Andersons is proud to join the conversation of the environmental benefits of biofuels. https://t.co/dgb0nHust9

For our final panel, we’re hearing from global #ethanol market pros on trade with our top ethanol partners across the globe and opportunities to grow these markets. #ELC2021 https://t.co/8SNqgeFdD0

Carbon Opportunity discussion on the role of biofuels in a net zero carbon future, featuring panelists from @POETbiofuels, @eheinc, and @Harvard. #ELC2021 https://t.co/K4QZWxb6oF