The USDA’s Foreign Agricultural Service (FAS) released the export data for the month of September, 2018, today and exports continue to stay on pace for a record year, now outpacing the total exports for the entire year of 2016.

In August, we experienced the highest 12-month period for ethanol exports in history and September has marked the second consecutive month of historic exports on a rolling basis. This past September, 89 million gallons (mg) were exported bringing the 12-month total to 1.62 billion gallons (bg), a record high. With the Brazilian sugar cane harvest now complete and ethanol shipments reportedly on their way south for October, we can expect those numbers to continue to grow in the final three months of the year.

A number of countries stand out among rolling export numbers over the past two years, both as consistent importers and as burgeoning markets. Brazil remained the world’s largest market for ethanol, behind the US, and has topped export charts for some time. As discussed in previous articles in this series, the country’s decreased performance over the summer months of 2018 is attributable to the cyclical nature of their crop harvest. Despite Brazil’s annual slowdown in imports due to domestic feedstock production (see the graph below), it remains a top market due to the country’s ethanol policies. 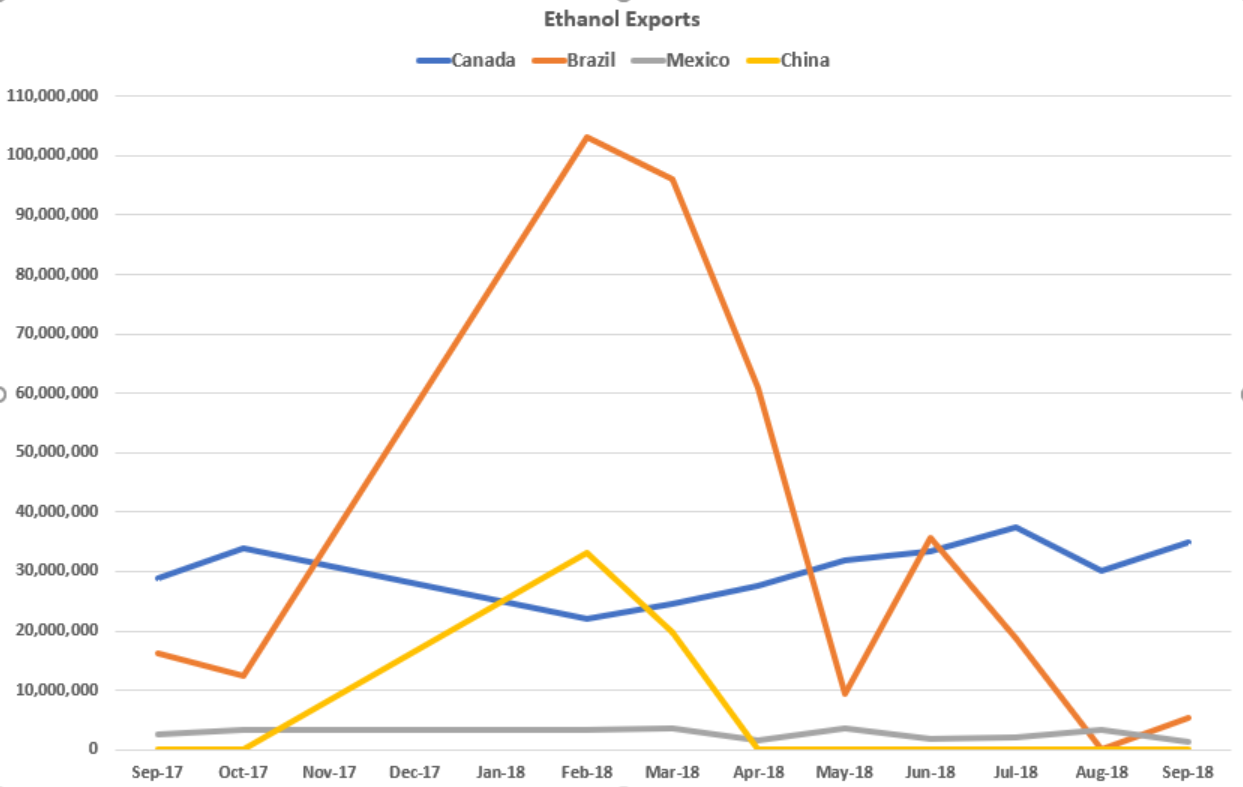 Brazil has a mandate for a minimum E27 blend for fuel in the country, but, due to the popularity of the hydrous ethanol fuel, the average blend rate is 47.8 percent according to the most recent Global Agricultural Information Network (GAIN) report by FAS. Hydrous ethanol is a fuel alternative made up of 95 percent ethanol and 5 percent water. As a result, increases in its popularity would have significant impacts on the overall blend rate in Brazil. However, this is largely limited by the price of hydrous ethanol and only finds real success when the price of hydrous ethanol fuel is below 70 percent of Brazil’s regular anhydrous E27 blend fuel.

A recent article by OPIS reports that Brazil’s National Oil, Gas and Biofuels Agency (ANP) has recorded the highest monthly record for the country’s hydrous ethanol sales in history. In the month of August, 2018 distributors sold 481.6 mg of hydrous ethanol and, in the following month, September, those numbers only fell to 475.8 mg. In a year-to-year comparison of 2017 and 2018, distributors hydrous ethanol sales have reached over 3.51 billion gallons in the first 9 months of 2018 – a 41 percent increase over the same period in 2017.

This story suggests not only a growing demand for ethanol products, but also a doubling down by consumers in the countries who have allowed the blending of ethanol into their fuel supply. This is something we have seen paralleled in the American market, with the recent announcement by President Donald Trump to allow year-round sales of E15 ethanol-blended fuel. This is mirrored in ethanol exports to countries across the globe seeking to expand the market access for fuel ethanol in their countries.

Despite another disappointing month for Brazil in terms of exports, 2018 remains on pace for a record year and rolling export should continue to reach historic highs, both as we close out 2018 and over the coming years. While certain markets like Brazil and China saw more export volatility in 2018, a positive trend continues to dominate ethanol export numbers. As Brazil continues increasing its blend rate and should barriers to trade fall in markets like India and China, ethanol exports will continue to grow ever larger. Stay tuned for next month’s update, where I expect to see higher numbers from the Brazilian market.

To view the original article and to stay up-to-date on the latest trends in global ethanol markets, follow Senior Vice President of Global Markets Craig Willis on Linked In.