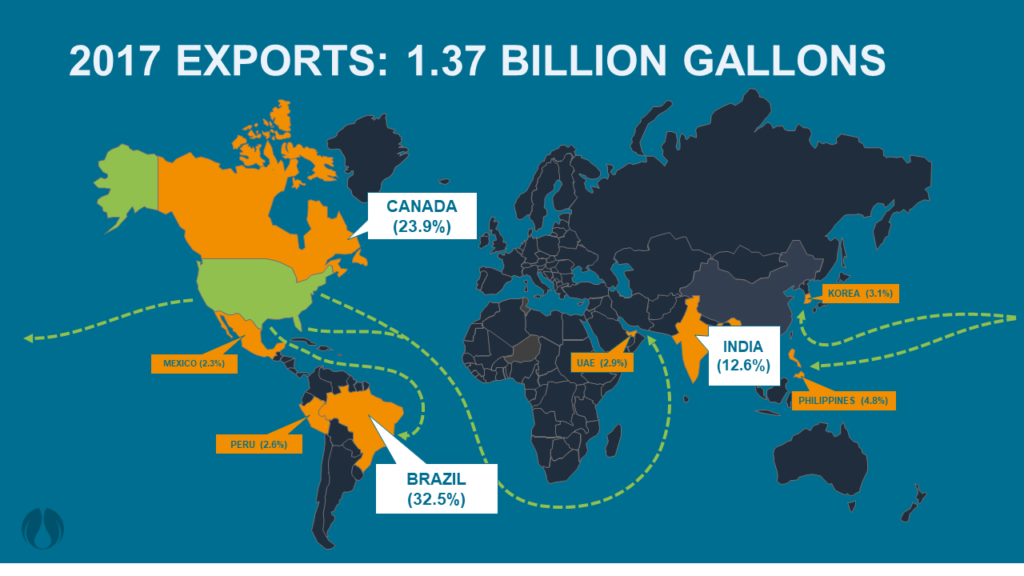 Today, the USDA’s Foreign Agriculture Service released their export data for the month of August and things continue to look up for the global ethanol export outlook, despite Brazil’s continued slow import pace. In just 8 short months 1.151 billion gallons (bg) have been shipped, putting the U.S. within 10 million gallons (mg) of the 2016 calendar year total of 1.16bg, with Canada remaining the top destination for U.S. ethanol. In particular, the August, 2018, export numbers saw an increase of 15mg over July, in spite one of the smallest export months to Brazil in recent years, which has historically also been one of the top destinations for U.S. ethanol.

At its peak, exports to Brazil reached 103 mg in February of this year. By comparison, the U.S. only exported 4.4 mg in August, which is likely a result of the country’s historically cyclical imports based on its sugarcane harvest. Observers expect exports to Brazil to raise slightly as the year closes out.

However, there were five countries who saw significant increases in their ethanol imports: the United Arab Emirates (UAE), Oman, Malta, Saudi Arabia, and Kuwait. While these country’s all saw increases, the UAE led the pack with 15 mg this month, nearly triple the next highest importer in the region. One strong explanation for this is likely the high global crude oil prices this month resulting in favorable blending economics that incentivize blending ethanol into fuel.

Crude oil prices have been rising dramatically over the past two months with prices today hitting $86.29 per barrel for Brent, $80.15 for the Dubai Mercantile Exchange (DME), and $76.41 for WTI. If we examine the price of Brent more closely – widely considered the global benchmark for oil prices – there has been a nearly $20 increase in the price per barrel, up from $68.38. With the highest oil prices since mid-2014, many countries now have a much higher incentive to blend ethanol, which may be one reason for such high imports in the Middle East.

Regardless of whether or not oil prices stay high, we can expect 2018 to end with record export numbers. As of August, we are over 200 mg ahead of export numbers from August, 2017, and, with four more months to be reported this year, there is little indication that this trend will be reversed. If oil prices continue to stay high, we can likely expect export numbers to have an even greater upswing towards the end of the year as Brazil begins importing following the end of their harvest period.

As these numbers are released each month, I will keep you updated as to any important changes in the global ethanol export climate. If you would like more context on how ethanol exports have gone since July, I encourage you to read my first article in this series. Stay tuned for more!