A recent report by the University of Missouri’s Food and Agricultural Policy Research Institute (FAPRI) released a study late last week that examined the impacts of small refinery exemptions (SREs) on domestic ethanol demand. SREs are reserved for only a handful of small refiners, which must demonstrate disproportionate economic hardship in meeting the requirements of the Renewable Fuel Standard (RFS). However, there is increasing evidence that EPA has given exemptions to large refiners reporting record profits and provided very little transparency to the public regarding its decision making.

Under FAPRI’s analysis, if the Environmental Protection Agency (EPA) continues to follow recent practices on RFS waivers, ethanol consumption would drop by hundreds of million gallons per year between 2018 and 2023. That, in turn, could translate to 1.6 billion bushels of lost demand for corn over the six-year period. In addition, the study suggests that the ethanol blend rate would fall steadily, dropping below 10 percent in 2019 and down to 9.5 percent by 2023 – compared to the 10.4 percent forecast before the EPA expanded its use of waivers. 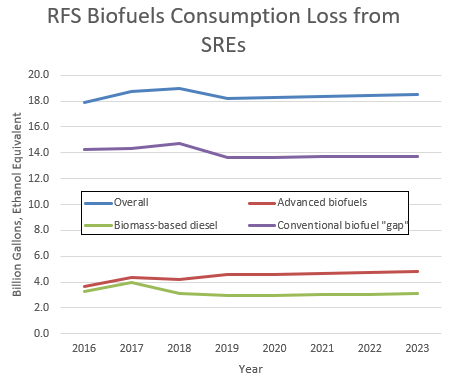 “The analysis is clear that these small refiner exemptions threaten to destroy demand for U.S. ethanol and corn alike,” said Growth Energy’s Vice President of Regulatory Affairs, Chris Bliley. “It is imperative that EPA fulfill its commitment to the 15 billion-gallon target set in law and reallocate any gallons lost to waivers so that demand isn’t further destroyed.”

Without an end to abusive refinery handouts and immediate relief from restrictions against the year-round sales of mid-level ethanol blends, like E15, the biofuels industry is at risk of having its growth from the past 10 years undone. The agency’s actions have already depressed U.S. ethanol consumption and sparked a nosedive in the value of Renewable Identification Numbers (RINs), creating ever-greater uncertainty among our nation’s farmers and rural communities.

Our producers and farmers deserve greater transparency when it comes to refinery exemptions. That’s why Growth Energy has petitioned the courts to force EPA to disclose who exactly who is getting these exemptions and why. We encourage you to share these facts about the abuses of “small” refinery waivers and discuss the impacts they have on the ethanol industry.

Groundbreaking @rhodium_group report on achieving net zero emissions → Along with EVs, "low-GHG liquid fuels are needed to... achieve net-zero emissions in the transportation sector by mid-century.” We look forward to being a part of the solution. rhg.com/research/closi…

“Clearly this is unjust, especially when farm families and biofuel workers have been working to make a living over the past few months." More in @MichAgToday on the EPA's SRE announcement → twitter.com/MichAgToday/st… michiganagtoday.com/growth-energy-…

During his confirmation hearing, Buttigieg highlighted the need to tackle the #climatecrisis thru new infrastructure initiatives. We are grateful for his support of biofuels on the campaign trail + look forward to working w/ him to make #biofuels a key part of his climate goals. https://t.co/vS4uBGX6mu

As America rejoins the #ParisClimateAgreement and the Biden Administration prioritizes ways to meaningfully address climate change, #biofuels are a key piece of the clean energy revolution and we stand ready to continue the work to decarbonize the transportation sector. twitter.com/ABCPolitics/st…