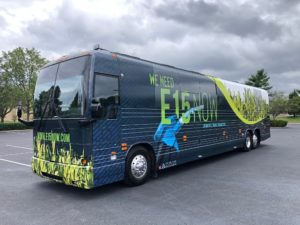 WASHINGTON, D.C. –  This Sunday, the nearly 30 year-old restriction that prevents E15, a renewable fuel blend made from 15 percent ethanol, from being sold in the summer months comes to an end, allowing American drivers to once again have access to a cleaner burning, better valued homegrown fuel.

“E15 is good for the consumer, it’s good for the environment, and it’s good for the wallet – plain and simple,” said Growth Energy CEO Emily Skor. “Allowing year-round sales of higher blend fuels like E15 also helps our farmers by increasing domestic markets for farmers, a critical need when American farm income is declining for the 5th consecutive year. Not only does this give farmers in rural America more certainty because of increased demand for their grain, it also allows consumers to choose a more affordable and cleaner burning fuel at the pump. We need E15 year-round, and we need it now.”

E15 is already sold in 30 states at least 8 months out of the year. However, due to outdated regulations, many consumers are unable to choose to put cleaner burning renewable biofuel blends like E15 in their tanks, an option which could save them 4 to 10 cents per gallon.

President Trump has repeatedly made clear he would like to end the “unnecessary” and “ridiculous” restriction on access to E15 year-round, and has the support of U.S. Department of Agriculture Secretary Sonny Perdue in addition to wide  bipartisan  support among policy makers on the state and federal level. Growth Energy and it’s members continue to press the administration and members of Congress to make their voices heard with this administration to get E15 year-round across the finish line.

As part of their campaign, Growth Energy is launching a bus tour to rally support for quick action on the president’s promise to unleash E15 ethanol blends. Over the next few months, the bus will appear at Midwest gatherings, including this weekend’s Cattle Congress in Waterloo, Iowa on Saturday, September 15.

“Rural America is counting on the Trump Administration to open up new domestic markets for homegrown fuel so we can have cleaner, more affordable options at the pump,” said Skor. “Nationwide adoption of E15 could drive billions of gallons of new ethanol demand, creating a much-needed market for two billion bushels of American corn. We’re calling on policymakers to make certain that 2018 was the last summer that drivers are denied a chance to save money on fuel while supporting local farmers. Our bus tour will help spread the message at fairs, campaign rallies, and community events across the heartland that rural America wants action on E15, and we want it now.”

Find an E15 retailer near you.

To achieve net-zero emissions and decarbonize the transportation sector, biofuels must be part of the solution. According to recent scientific research from @rhodium_group, #biofuels must play a role in our nation's climate agenda that @POTUS has put into place. #ClimateChange https://t.co/9QIfRdcihX

Our friends at @mncorn announced a commitment of $1 million for ethanol infrastructure grant programs. This is huge investment in the future of higher blends of ethanol, and we look forward to working together to increase access to lower-carbon fuels! growthenergy.org/2021/04/15/min…

.@POTUS's infrastructure plan should include expanding access to low carbon #biofuels, like plant-based ethanol, that can help us reduce emissions today. Thank you @RepCindyAxne. twitter.com/RepCindyAxne/s…

.@RepCindyAxne is fighting to include #biofuels in any infrastructure legislation to be considered by Congress. To decarbonize the transportation sector, low-carbon fuel options like biofuels MUST be part of the solution. Thank you for taking action! twitter.com/RepCindyAxne/s…