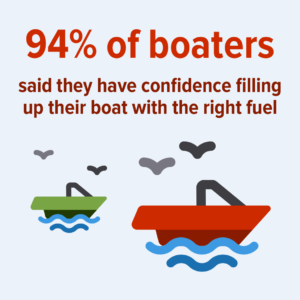 WASHINGTON, DC — CK Motorsports and Growth Energy released a new survey, which found that an overwhelming majority of American boaters are confident when selecting fuels. The poll of 500 U.S. boat owners conducted by Quadrant Strategies showed that 94 percent of boaters find it easy to pick the right fuel and are confident in their selection.

“Critics of the ethanol industry often claim that offering higher ethanol blends would confuse boaters and cause misfuelling issues, but that is simply not the case,” said Keith Holmes, owner of CK Motorsports – a premier certified Mercury Marine Engine & Racing service dealer and Throttleman of the American Ethanol Cat Can Do Catamaran. “Ninety-seven percent of the nation’s fuel supply is E10 – gasoline that contains 10 percent ethanol – and all current boat engines are warrantied for E10 and have been for nearly two decades. Labels at the gas pump clearly indicate the ethanol content of the fuel, and boaters report that picking the right option is easy and worry free.”

This labeling is mandated under federal law, as some small equipment and marine engines should only be fueled with E10.

“Boaters appreciate that E10 is a high-performance, earth-friendly option embraced by the racing community and warrantied by marine manufacturers,” Growth Energy CEO Emily Skor said. “It is quite clear that boaters are making the right choice at the pump. From the roadways to the offshore powerboating events that Keith Holmes competes in, ethanol blends are providing great value to consumers.”

Holmes, a veteran mechanic, has long been a source of expertise for policymakers, appearing last year on a Capitol Hill panel alongside other engine performance experts and professional fishermen to explain the importance of biofuels in protecting the environment, preserving America’s energy security, and providing a high-octane boost to boaters.

In Case You Missed It → Growth Energy filed a letter of intent to sue the EPA for missing its deadline to set the 2021 #biofuel blending targets. Read more about what CEO @EmilySkor has to say: growthenergy.org/2020/12/01/gro… https://t.co/2kKygdDwb7

@GrowthEnergy announced its intent to sue the @EPA for missing the Nov. 30 deadline for finalizing Renewable Fuel Standard volumes. https://t.co/dBk6DUQLdO

With lawsuit against @EPA, #biofuel leaders @GrowthEnergy argue the agency “needs to take action on behalf of rural America and follow through with its #RFS obligation.” https://t.co/SJUOdwojP2